Years ago, I took the leap and left my familiar life behind. I quit my job and my career. I broke up with my partner whom I had been with for 10 years. I sold my (our) house, put my stuff in storage, and moved back in with my parents at age 37.

I always had the desire to travel. To go see foreign lands. Walk through unfamiliar streets with my camera in hand, strike up a conversation with a stranger, enjoy being lost, and experience the beauty of this vast world. In the wake of all these life-changing decisions and moves, I chose to do just that. Plan a first-ever solo travel journey, beyond the U.S. borders.

Below is a short story I wrote shortly after I got back from my travels to Bolivia, Peru, Costa Rica, Morocco, Spain, and Portugal. It wasn’t an epic world tour to every country, but it was epic to me. It quite literally changed my life. How I saw myself and how I saw the world.

“Travel isn’t always pretty. It isn’t always comfortable. Sometimes it hurts, it even breaks your heart. But that’s okay. The journey changes you – it should change you. It leaves marks on your memory, on your consciousness, on your heart, and on your body.” – Anthony Bourdain

This is my story of how travel, well solo travel, propelled me into not only my new path as a travel writer and photographer but pushing me to be the best version of myself. A version that had been hidden for so long.

My love affair with Solo Travel

The open suitcase sat there. It sat there staring at her. Taunting her as she paced back and forth in front of it, wondering why this was so hard. The pile on the floor had made it in and out of the suitcase at least ten times. Some items making the cut and some not. These were important decisions she had to make. What items would she have to have for the next four months? What could she leave behind? Should she bring a red dress or a black dress? Such precise decision-making was not her area of expertise. These were all questions that seemed like they should come with easy answers, but they weren’t. No decision was as hard as the one she had made a few months back, so why was this moment riddled with unexpected anxiety and not pure excitement?

Decisions had been made. They were made with great care and thought. The decision to end a comfortable and familiar part of her life had been terrifying. He had been the light of her life for so many years. He had been a part of the plan all along. But he was not a part of this plan. He was chained to the past and not tied to her future any longer. And although he had left bruises on her heart, she cherished those bruises as they brought her to this moment.

The decision to step outside the world she had known into this unfamiliar journey by herself had been made with only the slightest hesitation. Out of all the choices she had recently made in her life, choosing what to pack should have been the easiest.

It was now dark outside. Her flight left in eight hours and the empty suitcase still sat there staring up at her. The realization she had been trying to pack for almost twenty-four hours set in. Mind spinning, not one clear thought had lingered in her mind all day. Her stomach felt like a twisted plate of spaghetti. It was the same feeling she had growing up, the night before a big test. This feeling was not unfamiliar to her. But why? Why did she feel this way?

She still wanted to go, right? Of course, she did. This had been the plan all along, even when she didn’t know it was the plan. She would still think of her old life fondly, but this would be the ultimate sacrifice to a life she had pictured in her head for so long. This had been a dream she was born with, as if in her blood. Freedom had come, but not in the way she had wanted.

The morning came just as it always had and she grabbed her suitcase full of decisions and walked into the airport, a place she had been a hundred times before. The faded blue walls and vaulted ceilings …But this morning, it felt different. It was a familiar place, that suddenly felt unfamiliar. She still had time to turn around. No one would care that she didn’t go through with it. But she would. She would care.

Boarding the plane with apprehension she wondered what was this fear she felt. What was she afraid of? Being on her own again? Traveling by herself? Would she recover? Could she recover? Did she bring the right dress? The fear could not be ignored. It needed to be treated and dealt with, like an unruly child.

She made her way onto the plane and carefully took her seat. She watched in admiration of the fit, yet elderly, man in his simple white t-shirt and jeans, sitting with such ease. In one hand was his worn copy of The Art of Happiness by the Dali Lama and clenched in the other, a cocktail. Weren’t we all seeking happiness in some form or another? The man didn’t appear fearful as she did. His sense of calmness was infectious, it was something she was willing to catch from a plane ride. But was he just hiding his fear? Maybe he had spent his years practicing the art of hiding his fear and this wasn’t true happiness sitting next to her. Maybe all we had was the power to make important choices, no matter how big or small, to propel us out of the state of fear and into a state of happiness.

Winding her way through the unfamiliar airport, she felt a strange connection. With its grayish prison-like walls and lingering stench, she couldn’t help but wonder if this was what it was like in prison. Was she in prison? She mimed her way through the airport to the cab station outside and hopped in as quickly as she could. She quickly realized, she was not the one in prison.

The sun was beating down as palm trees soared high in the air. With the cab windows rolled down, she could feel all her senses kick in. The intoxicating scent of pollution and cooking spices from the local markets was overwhelming, just like her arrival. Upon arriving at the hotel she drug her luggage up five flights of stairs to her mini oasis. She stood staring out of her hotel window, as the sun set on the Moroccan rooftops. She had arrived. This was it. A sense of relief passed over her, but not before weeping for hours, feeling like this was all a big mistake.

But as the sun rose the next morning, it finally all felt like home. For the first time, she saw, felt, heard, and smelled things clearly. She had brought herself to this moment all on her own and it felt divine. With a big sigh of relief, she felt her fears subside. So she put on her red dress and headed out to the bustling streets of Casablanca, with zero intention of blending in anymore. Her choices had propelled her forward to this point. She finally trusted it now, as it had led her here, and here is exactly where she wanted to be.

Why I love Solo Travel

With solo travel, there’s a sense that you can accomplish anything if you can figure out how to navigate your way through this world on your own. It opens you up to conversations with others you may not have had traveling with a partner or friend. It allows you to experience a sense of freedom to be whoever you want to be. Whatever journeys you choose to take, make sure at least one of them is on your own. Enjoy the ride. See the world. And I hope you share that journey, here with me at Small Town Stops. Follow along in mine @small_town_stops and I hope to see you out there somewhere, someday! 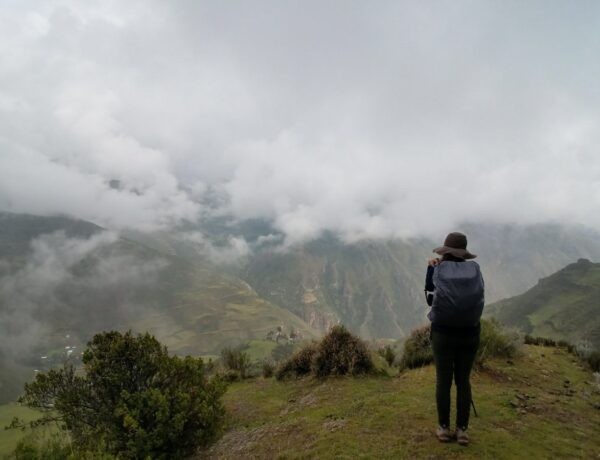 What It Means to Be a Traveler vs. a Tourist